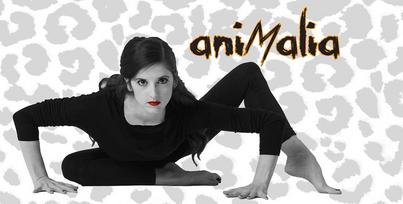 The "Combined Minds" cast includes 15 adults and 10 children (ages 9-13) who portray the coming-of-age-story about a girl trapped between child and adulthood and how she is victim to bullying as her peers tease her about playing with toys. Similar to the Russian Ballet, Petrushka, the story features enlivened toys that develop emotions. Throughout the piece, the toys interact with the girl about plotting their revenge to her bully. Portico Dans Theatre incorporates exciting aerial acrobatic devices, video and installation art to create a larter-than-life toy room. Local artist Glenn Herbert Davis adds to this multidisciplinary production to create a set that grows as it comes to life. The massive artistic set pieces include toy box, jack-in-the-box, barrel (of monkeys), with which the dancers must interact to create this fantastical production.

​(Premiered july 2009 at the nightingale Theatre)

For the curious and curious-er, see what Alice found through the looking glass. An interpretation of Lewis Carroll's "Allice's Adventures in Wonderland" and "Through the Looking Glass and What Alice Found There." Set in Two Acts and Sixteen Scenes, this full-length production features the talents of local dancers, aerialists, actors, and stage combatants. Performances include the blue caterpillar on pointe, a hip-hop dancing Mad Hatter, the Cheshire Cat on a spinning trapeze, and Birds high in the air on silks, among others. 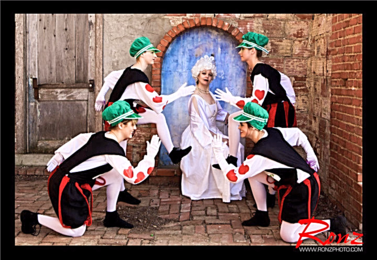 Multidisciplinary modern dance production celebrating family as the central element of life. Lineage offers an intimate, beautiful, and ofttimes provocative observation of our first and longest relationship. The piece looks at four small families with all come from one bloodline. The families explore themes such as birth, death, separation, etc.; anything that can and does happen in the course of your lifetime.

Collaborating artists are Nathan Harmon (video) and Glenn Herbert Davis (set/installation). Harmon's video allows the audience to connect living and dead. Davis' frames provide the bases for the portrait series, which cover themes of birth and death. Each of the frames house one family unit. Dancers move inside the frames similar to the popular Harry Potter film series.

Portico Dans Theatre focuses on the intricate beauty of the solo, duet and trio dance works with Ones, Twos, Threes this April. The unique concept of this production is that it features teenage participants of the company’s new Choreographic Artists Mentoring Program (C.A.M.P.) as the main choreographers.

​Animalia is inspired by the habits and movements of wild animals. From the delicate nature of elephants mourning their dead to the electricity of jungle cats hunting prey, this eclectic show incorporates a wide range of dynamics and emotions. The choreographers studied and analyzed the animals and used their habitual movements to create each piece. Find your spirit animal with Animalia! 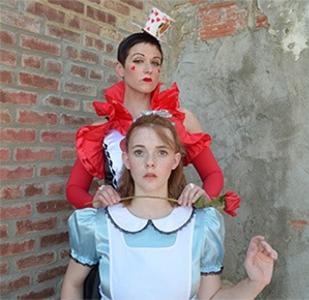 “WO” honors the strength of women everywhere. The production addresses sensitive issues such as sexism in the workplace, miscarriage, a woman’s right to choose, and body image. “WO” also looks at the more beautiful aspects of being a woman, including motherhood, and women’s journey throughout time. One very distinct aspect of the production is the fact that it highlights the creative voice of trans-women and women of color. ​ 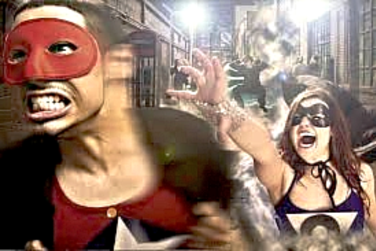 Theatrical performance with video, contemporary, and aerial dance. BorN is the story of a man who faces tragedy and the quest to find his lost identity. As time elapses, he can no longer discern between paranoia and reality, forcing him to face his own psychological demons. The main character must find his lost identity, family, and home. He is forced to embark on a journey along an empty road as he attempts to remember the events that led him there. One story line moves forward in time while the other reveals glimpses of his past. Contemporary dance is activated by music to access the main character's memories about union and separation, which are stored in his body. Throughout the story his memories forcefully intrude and become more distorted as his body undergoes the stress of physical exhaustion and extreme hunger. "BorN" is a complicated head spinning adventure, which leaves you wondering where reality ends and dementia begins.

Portico Dance Theatre honors our 10-year anniversary by bringing back our cherished production of “Project Alice,” originally staged in 2009 and 2010. We are especially honored to have three of the original cast members dancing with us for this production!

Join a colorful cast of character from the tale of "Alice in Wonderland," presented with contemporary, modern, and aerial dance. "Project Alice" is based on Lewis Carroll's “Alice's Adventures in Wonderland” and the sequel “Through the Looking Glass and what Alice found there”.​ 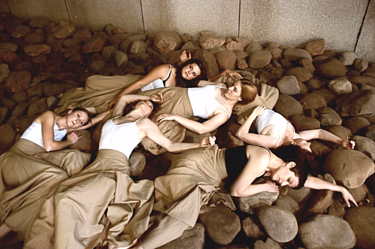 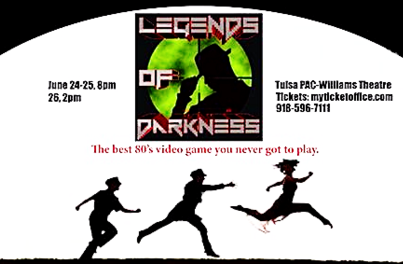 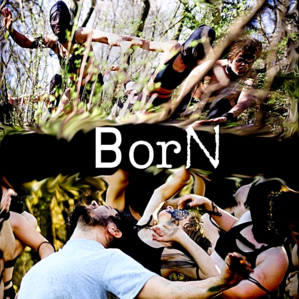 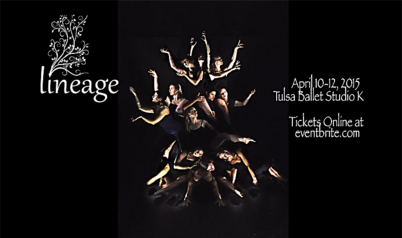 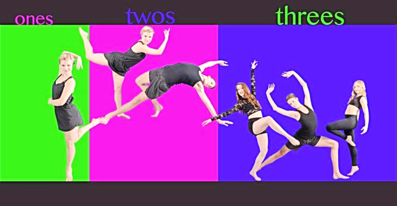 Features a wacky cast of Super-Heroes and Super-Villains as they plot, connive, battle, and fall in love to the tune of 1940's favorites. The contemporary dance production includes pieces in ballet, tap, jazz, and swing dancing. Set in two acts and twelve scenes in the wartime era, this production featured the talents of local dancers, actors, and live musicians, along with cartoon animation and a special performance from The Oklahoma Swing Syndicate. Portico Artistic Directors Jennifer Alden and Valeria Cordero fuse dance, theater, music, and video to bring new visual art works to life. 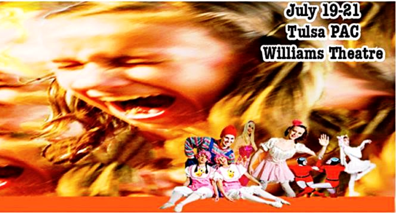 "Mob Mental.ity" features dancers, musicians, renowned video and installation artists. The production explores the mentality of mobs; how they are formed in even the most innocent of circumstances and how they respond to external and internal stimuli; and learn to breathe and work together as a unit, even if they are unaware of each other's existence prior to the mob formation. Various mobs are depicted: children at a birthday party, religious, political, civic, etc. The entire production is set to live music and dancers must also interact with pre-recorded video segments. PDT uses five genres of dance in the production: aerial, contemporary, ballet, hip-hop, and modern. 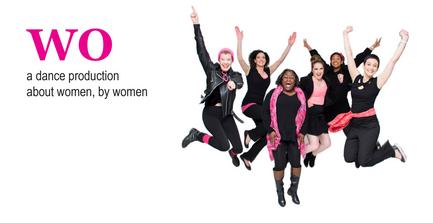 Elements is a collaborative work between Jennifer Alden, Valeria Cordero, Viviane Wolfe, and the dancers of Portico Dans Theatre (PDT). The entire work includes 5 sections, which represent our interpretation of the elements (Air, Water, Earth, Fire, Aether) as theorized by Plato and Aristotle. While each piece represents our interpretation of the natural motion of the element, we also explored the outcome of the corruption and eventual destruction of these elements by the collection of elements that rely on elements and most--humans. Each section is meant to blend into the next and incorporates live music, fabric, and trapeze. 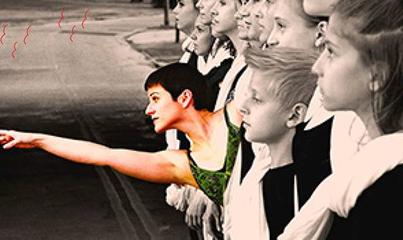 Legends of Darkness is the best 80’s video game that you never got to play! Loosely based on Joseph Conrad’s novel, Heart of Darkness, the performance is a multimedia production featuring dance, video display and original live music from Canadian composer, Christien Ledroit. The dancers are composited into computer-generated visuals on the screen as if the action is set inside a video game. A narrator "plays the game” using the input of the audience to direct the finale of the piece (with multiple outcomes available). Who dunnit? You decide.

Pagliacci Project is adapted from Ruggero Leoncavallo's opera Pagliacci, now set in a 20th century circus. Audiences are immediately immersed in the backstage happenings and commotion of a circus environment. Dancers and aerialist will showcase awe-inspiring feats using the aerial apparatuses. Mayhem ensues when Pagliacci believes (through a dream sequence that his wife is having an affair. When his suspicions are confirmed (thanks to the help of a "superfan" in the audience), he becomes enraged and begins a deadly journey. Meanwhile the show must go on as circus performers maintain their on and offstage performances in their daily lives.